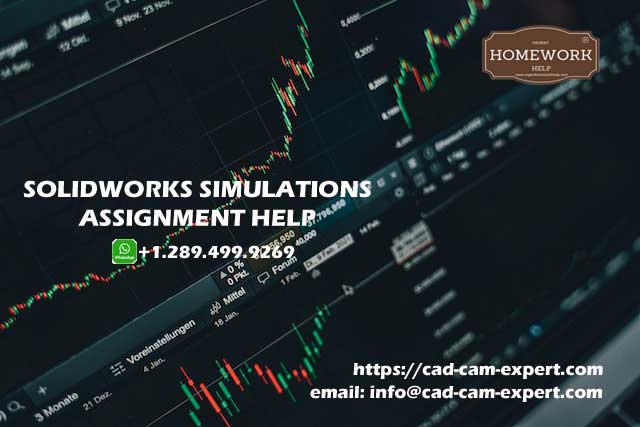 Welcome to CAD-CAM-Expert.com where we do all things CAD! Get help for your college, university or business projects and assignments from our best design engineers. The best part, we can deliver urgent assignments on top priority. Contact us any time for instant support. We are open 24/7. It's easy to get in touch with us: Our email id is: info@cad-cam-expert.com and you can also chat with us on Whatsapp on +1.289.499.9269. Of course, you can also chat with us on our website any time.

What is a Simulation?

Simulation is a technique used to imitate the behavior of real-world systems, such as mechanical parts, electrical systems, or entire buildings, under various loads and conditions. This can be done through mathematical modeling and computer simulations, which allow engineers and scientists to predict the behavior of a system, identify potential problems, and test different design options. Simulation enables engineers to analyze complex systems that would be difficult or impossible to test in the real world, and it can be used to optimize the performance, safety, and reliability of a product or system. There are many different types of simulations, such as structural analysis, thermal analysis, fluid flow analysis, and motion analysis, each with its own set of methods and techniques.

How to Define Simulations in Solidworks?

Get help for any Solidworks Simulation Assignment. Email us at: info@cad-cam-expert.com or ping us on Whatsapp on: +1.289.499.9269

Overall, the process of defining and running a simulation in SolidWorks is a powerful tool that allows engineers to predict the behavior of a product or system under various loads and conditions, and make design decisions that will improve its performance and reliability.

SolidWorks is a 3D CAD software that can be used to design, analyze, and simulate a wide range of products and systems. Here is a list of some of the simulations that can be run with SolidWorks:

SolidWorks thermal simulation is a simulation technique that can be used to analyze how temperature changes affect the behavior of a design. It is a powerful tool that allows engineers to predict the temperature distribution in a product or system, and understand how it will perform under different thermal conditions. The simulation can be performed through a steady state or transient thermal analysis, and can be used to predict the heat transfer between a fluid and a solid, as well as the heat transfer through a solid material. The thermal simulation can also help identify potential problems such as thermal stress, warping, or thermal expansion, and test different design options to improve the performance and reliability of a product or system. SolidWorks thermal simulation is a powerful tool that can be used to improve the design of any product that is affected by temperature changes.

This is not an exhaustive list, but we hope this should be sufficient to get you started on your quest for more knowledge. If you need help with any simulation, reach out to us anytime. We are open 24/7. Our email id is: info@cad-cam-expert.com. You can also reach us on Whatsapp, on +1.289.499.9269. Chat with us on our website anytime.